The Government Wants To Protect Troops From Microwave Weapons, Which Trump Officials Considered Using On Immigrants 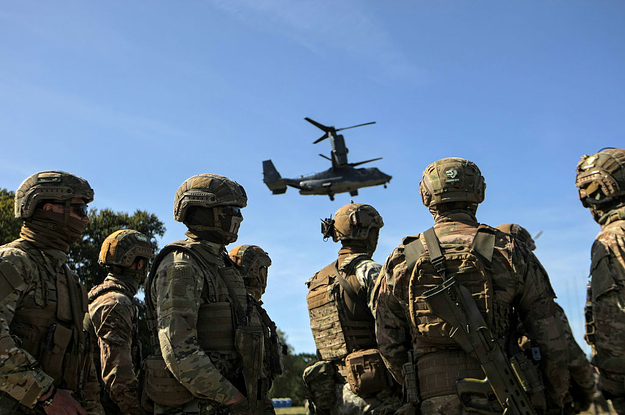 After being dismissed for decades, microwave weapons are beginning to be viewed as a serious military threat — prompting the Defense Department to issue a request to outfit US soldiers with detectors for what it called “a growing threat on the battlefield.”

The weapons, some of which cause burning sensations, have already been considered for use on US soil. In June, a federal police officer had requested a truck-sized microwave heat ray to disperse Black Lives Matter protests. The Trump administration considered using that same device against asylum seekers in 2018.

The Defense Department’s interest in detecting microwave weapons comes as Israel, China, and Russia are reportedly inventing their own versions of a microwave heat ray “Active Denial System” that the US pioneered two decades ago. The US continues to develop the technology: An Air Force Research Laboratory is rolling out a “counter-swarm electromagnetic weapon,” called THOR, to fry drones in mid-flight. A Navy microwave weapon prototype mounted on a standard gun mount was unveiled in 2018. The need to disable drones became more real with the autumn war between Azerbaijan and Armenia, which the former won with fleets of drones decimating the latter’s defenses.

Then, in December, a new report suggested these weapons could cause neurological injuries. The National Academies of Sciences, Engineering, and Medicine’s criticized report suggested the weapons were the “most plausible” explanation for puzzling neurological injuries seen in at least 15 diplomatic personnel and their families in Cuba in 2016 and 2017.

“Without known patterns of [radiofrequency] injury to guide diagnosis, it will be difficult to differentiate [microwave] injury from other common sources of illness and injury such as heat stroke,” says the defense agency’s microwave weapon detector program request, which closes in about two weeks. “This ambiguous symptomology is aggravated by the transient nature of RF energy. Without a sensor it is possible that no residual evidence of RF attack will be available.”

The Defense Department declined to comment on the detector contract. However, experts contacted by BuzzFeed News suggested that the burgeoning military interest in microwave weapons might spring from the advent of drone-zapping weapons and the NASEM report. The technology, they added, is noteworthy as a new battlefield concern in the 21st century.

“I suppose that although the US has never deployed these weapons in a theatre of war, there’s a fear that other actors will,” Andrew Wood of the Australian Centre for Electromagnetic Bioeffects Research said by email. They can easily be concealed behind cloth screens, he added, so US military personnel experiencing burning sensations, for example, might need a detector to tell if someone else is pointing a microwave weapon at them.

The contract’s demand for a wearable sensor that can fit into a rifle magazine pouch and can be clipped to a vest also points to concerns about accidental exposure to microwaves by military test site workers, environmental epidemiologist Marloes Eeftens of the Swiss Tropical and Public Health Institute told BuzzFeed News by email.

Despite the burning sensation one might feel when they are in the beam of a “heat-ray-like” weapon, Eeftens warned that it would be hard to determine whether a concentrated microwave field was to blame. “You will come out with no marks, so it’s difficult to objectively determine if and how much someone was really exposed to,” she said.

There are detectors for other kinds of radiofrequency waves than the microwaves described in the Department of Defense’s contract solicitation, Paul Elliot of Magnetic Sciences Inc. in Acton, Massachusetts, told BuzzFeed News. They are usually intended for people who work with electronics.

“The things we sell are the size of bricks, or at least half a brick,” he said. “You wouldn’t wear one.”

While high-temperature-inducing microwaves, like the ones found in ovens, can cook food and cause burns, the question of whether neurological health effects can result from less powerful ones has long lacked evidence and has been subject to the kinds of conspiracy theories seen today about 5G cellphones.

US Air Force experiments set limits on human microwave exposures in the 1970s during studies of electromagnetic pulses seen from nuclear explosions. Those standards have widely been adopted since, but a 2018 NATO technical report called those limits scientifically unjustified, saying they weren’t backed by any experiments showing injuries. A report by French researchers last year that low-power pulsed microwaves were associated with cancer and behavior changes in rats raised the health effects question once more, especially with systems such as THOR now contemplated for field use against drones.

“I don’t expect major safety problems for people in the beams, but on the other hand, the amount of research on bioeffects from such pulses is limited,” bioengineer Ken Foster, of the University of Pennsylvania, said. “If the military is going to field these weapons, they jolly well better do good safety studies.”

After Fueling A Genocide, Facebook Is Taking A Stand Against A Myanmar Coup

Women Are the Future of Africas COVID-19 Recovery