Hoover Poll: Amid Our Divides, Is Unity Attainable?

Prior to the traditional Labor Day kickoff of the 2020 presidential election, we conducted the first in a planned biannual Hoover Poll using a random sampling of approximately 2,000 respondents. In addition to election-related issues, the poll explores three major themes: governmental power and liberty; social and environmental justice; and populism. The responses reported below are weighted to reflect population average demographics.

Assessing the degree to which Americans value personal liberty over governmental authority reveals basic differences between Republicans and Democrats. Going back to the New Deal, this fault line has reflected philosophical differences between the parties, especially on issues pertaining to government intervention in the economy. Table 1 shows that preferences for government intervention still deeply divide the parties.

RELATED: Tulsi Gabbard Torches Pelosi For Describing GOP As ‘Enemy Within The House’ – ‘Like Throwing A Match Into A Tinderbox’

For example, 69% of Democrats favor rent control while only 38% of Republicans approve. Republicans also oppose (71%) a carbon tax, raising the minimum wage to $15 per hour (52%) and guaranteeing a $12,000 annual income (57%). Meanwhile, on each of these issues, Democrats went the other way, with 66% favoring a carbon tax, 81% backing a $15 per hour minimum wage and 62% supporting the $12,000 guaranteed income. These differences persist across other issues such as a flat tax and the level of government regulations.

On what may be the culminating issue regarding the state and the economy, a bare majority of Democrats (51%) expressing an opinion preferred socialism whereas only 8% of Republicans said the same. 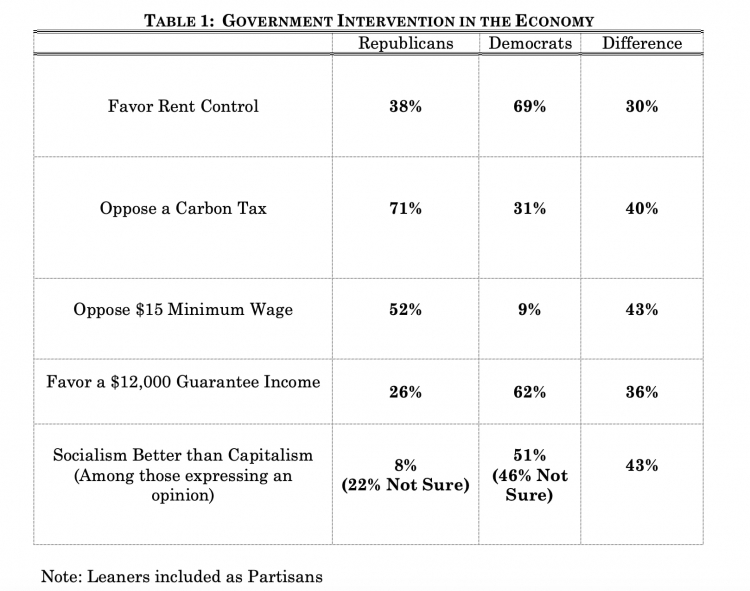 Table 2 shows that the same dichotomy exists regarding issues of personal freedom. Almost three-fourths of Republicans consider political correctness to be a major problem in the U.S., while only one-third of Democrats agree.

“Shelter in place” policies were also divisive with 90% of Democrats agreeing that they are the only way to stop the spread of COVID-19 while 55% of Republicans thought the policy was worse than the cure. Republicans, compared to Democrats, favored by a 61%-14% margin keeping the status quo or lowering restrictions on gun ownership.

Related: Top Dem Accuses Trump Of ‘Actively Courting A Rise Of The Confederacy’ And ‘Civil War In Our Country’

The major exception to the freedom of choice dimension occurs surrounding the issue one would expect it to — abortion. Roughly 70% of Democrats say abortion should either be legal with minor exceptions or always legal. By contrast, about two-thirds of Republicans believe abortion should be allowed only in special circumstances (to save the mother’s life) or never legal. This exception to the rule can be partially attributed to differences between the parties on religious practices, with Republicans being more observant than Democrats and often belonging to churches that are anti-abortion. (Moreover, Republicans by more than 2-1 over Democrats identified as born-again Christians.) 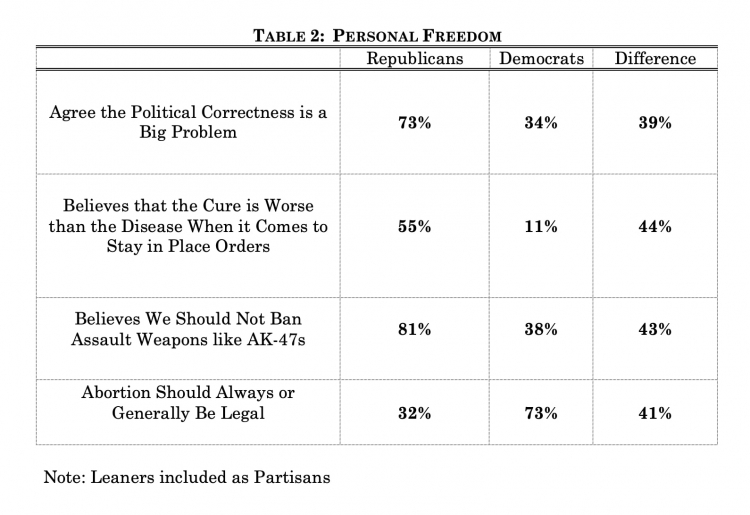 One interesting side effect of Donald Trump bringing non-college-educated voters into the GOP fold (“I love the poorly educated!”) is that the party’s view of increasing taxes on the wealthy has shifted. Today, Republicans are now evenly divided on raising taxes, with 54% saying the tax system is unfair. The number of GOP identifiers with a college degree and/or a post-graduate degree has fallen from 40% a little over a decade ago to 31%. (In the Democratic Party, this figure has held fairly steady and is currently 38%.)

The movement into the Republican camp of white, blue-collar, less-educated voters has shifted traditional Republican positions on other economic issues as well. In part this is because of the addition of older, white, less-educated voters into GOP column: More Republicans receive Social Security, unemployment insurance, food stamps and disability insurance than do those identifying with the Democratic Party.

The Hoover Poll also has data on how Americans feel about racial justice, climate change, migrant laws, sexual orientation, removing statues of former icons, affirmative action and other issues. In many cases, the typical partisan divide cuts across issues ranging from social justice to climate concerns.

Democrats favor affirmative action for college admission, removing statues of Confederate generals, a guaranteed annual income, allowing illegal immigrants to stay in the U.S. and apply for citizenship, and they believe that the U.S. economic system favors the rich. On each of these topics, Republicans are on the other side, as Table 3 shows. 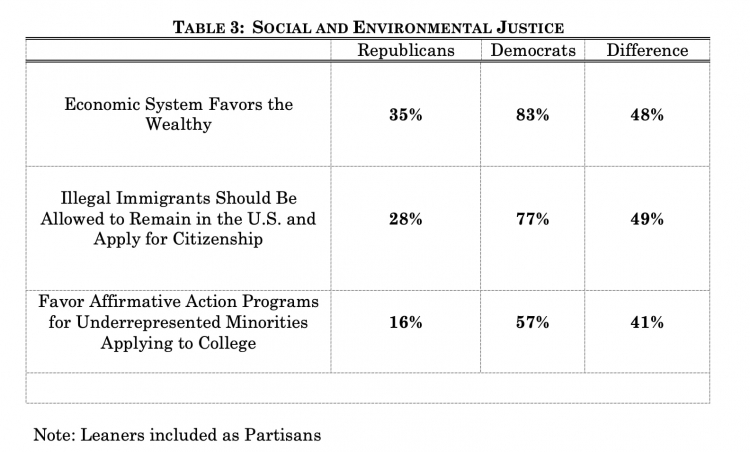 The poll’s third theme, populism, is not unique to the United States. France, Italy, Spain, Poland, Hungary, Britain, The Netherlands, and Argentina are other countries that have populist movements and political parties. Populism is defined as a belief that there is a “people” and an elite sector that has misled the people by governing badly, and that if the “people” can make decisions, the government problem will be solved.

Table 4 shows that Democrats and Republicans share several populist views, with independents expressing populist views generally at least as often as Republicans and sometimes more often than members of either major party. For example, majorities of both parties believe that politicians lie most or all of the time about what they will do if elected. 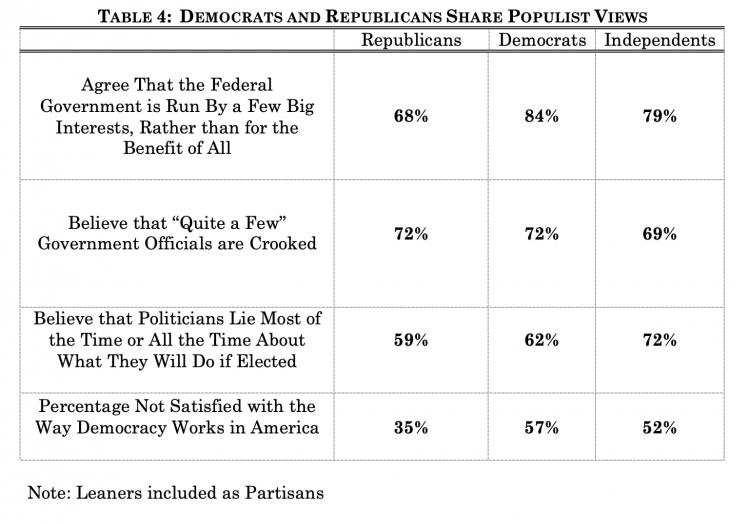 Table 5 shows that trust in institutions is also low; the only American institutions receiving 60% confidence ratings are the police and the military, with the judiciary, churches, local and state government plus public schools at a little over 50% confidence levels. Congress, corporations and the media all have less than 40% approval. Independents’ confidence in institutions relative to members of the two major parties mirrors the relative prevalence of populist views. 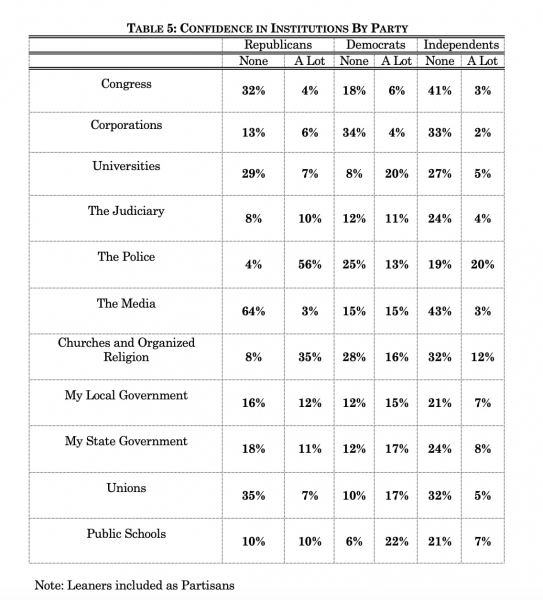 Democrat and Republican populists, however, have divergent views on several issues. Over 80% of Democrats favor stricter gun laws, including banning the sale of automatic weapons, and solid majorities favor abortion rights, government action on climate change, raising taxes on families with more than $250,000 in income, and legalizing marijuana. All of these and other issues separate Republican and Democratic populists in major ways. The left and right versions of populism have entered U.S. politics and will, through the electoral process, have a role in shaping the politics and policy of the two major parties. Subsequent Hoover Polls will be a useful tool in tracking the various aspects of populism on both the left and right.

Overall, the results of our poll show that there are major differences between the political parties that will make it difficult for the newly elected president to bring about unity. On the other hand, majorities of both parties say they prefer representatives who compromise on politics and would prefer to be American rather than citizens of any other country. Future polls will let us know if we are making any progress toward unity.

Syndicated with permission from RealClearWire.

David Brady is a professor of political science at Stanford University and the Davies Family Senior Fellow at the Hoover Institution.

Douglas Rivers is chief scientist at YouGov, a professor of political science at Stanford University, and a senior fellow at the Hoover Institution.

The post Hoover Poll: Amid Our Divides, Is Unity Attainable? appeared first on The Political Insider.