2020 Was One Of The Hottest Years On Record. Global Warming Is To Blame. 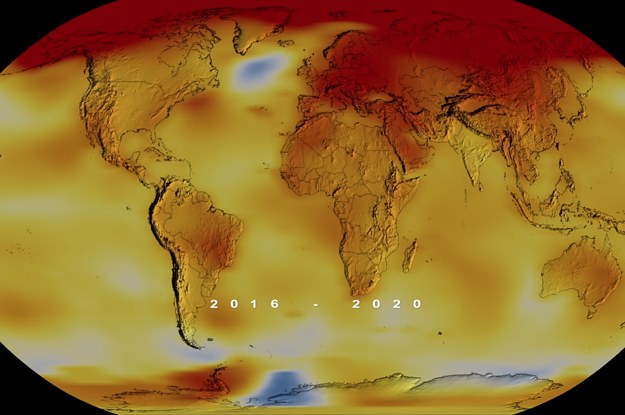 2020 was officially one of the hottest years on record, a sign of unabated global warming, according to a handful of analyses published by scientists worldwide over the last week.

The heat record comes after a year punctuated by climate disasters: historic heatwaves, hurricanes, and wildfires.

“This is a clear indication that the global signal from human-induced climate change is now as powerful as the force of nature,” Petteri Taalas, secretary-general of the World Meteorological Organization, said in a statement.

The analyses disagree on whether 2020 was the hottest year ever recorded. A NASA report published on Thursday found that 2020 narrowly beat out 2016 as the warmest year ever, effectively tying the record. Another analysis, published on Thursday by the National Oceanic and Atmospheric Administration, concluded 2020 was a close second to 2016. And last week, the European Union’s Copernicus Climate Change Service determined 2020 tied with 2016 as the warmest year.

The conclusions differ slightly because research groups apply varying techniques for piecing together a global picture of temperatures based on temperature observations from thousands of weather stations.

The 2020 heat record is just the latest in a string of years hit with more heat.

“The past seven years have been the warmest seven years on record,” said Lesley Ott, a NASA researcher. So regardless of where individual years fall, “the consistency of the most recent years being the warmest on record is very, very clear,” she said.

For all of these analyses, “the difference between 2020 and 2016 is smaller than the uncertainty in the record,” Zeke Hausfather, a climate scientist with the independent research group Berkeley Earth, told BuzzFeed News by email. “So it’s effectively a tie for the warmest.”

2020 was marked by blistering heat for most of the year, only blunted toward the end by the natural cooling phenomenon, La Niña.

“The exceptional heat of 2020 is despite a La Niña event, which has a temporary cooling effect,” Taalas said.

Siberia experienced a monthslong heatwave and the Arctic town of Verkhoyansk clocked its hottest day on record, reaching 100 degrees Fahrenheit on June 20. “This event would have effectively been impossible without human-induced climate change,” a team of scientists concluded.

2020 was the warmest year on record in Europe, coming 1.6 degrees Celsius above the average temperature from 1981 to 2010, according to the Copernicus analysis. 2019 previously held this record, where observed temperatures were 0.4 degrees Celsius higher than the same period.

Last year also marked the busiest known hurricane season in the Atlantic Ocean, as well as a historically damaging series of wildfires in the western US. The result was the US experienced its most billion-dollar disasters in 2020. The year also kicked off with some of the worst bushfires in Australia’s history. Moreover, carbon dioxide levels continued to climb in the atmosphere, hitting a new maximum of 413 parts per million last May.

Meanwhile, the pandemic triggered an economic shock that caused US emissions to drop an estimated 10.3% in 2020, according to a preliminary analysis by the research organization Rhodium Group, part of a larger trend of declining emissions worldwide last year. But a brief decline in emissions won’t be enough to curb the world’s warming trend — that will require long-term emissions cuts.

“The vast majority of the warming we are seeing is due to the human emissions of greenhouse gases,” Ott said.

US Solar Companies Rely On Materials From Xinjiang, Where Forced Labor Is Rampant

Trump Will Continue Rallies, Plans To Brandish Obituaries Of People Who Allegedly Voted