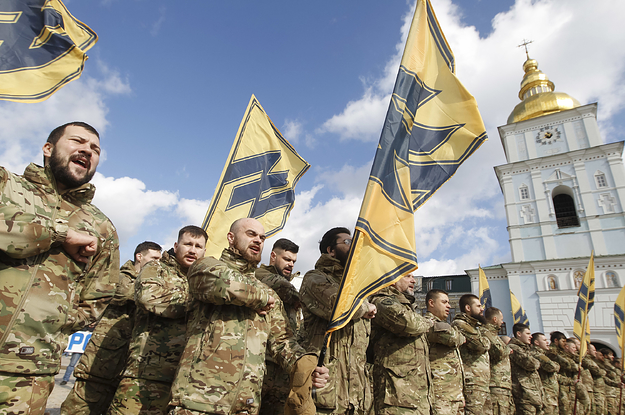 Despite attempts to drive it off the platform, a violent Ukrainian far-right group with ties to American white supremacists is using Facebook to recruit new members, organize violence, and spread its far-right ideology across the world.

Although it banned the Azov movement and its leaders more than a year ago, Facebook continues to profit from ads placed by the far-right organization as recently as Monday.

Since July, Azov, which sprung up during the Russian invasion in 2014, has opened at least a dozen new Facebook pages. Alla Zasyadko, a 25-year-old member, has used one to place 82 ads on the social network, paying Facebook at least $3,726, according to the platform’s ad library. Many of the ads called for street protests against the Ukrainian government. One of the ads encourages children to sign up for a patriotic youth training course. Similar courses have included firearms training.

A Facebook spokesperson told BuzzFeed News, “The Azov Battalion is banned from our platforms and we remove content that represents, praises or supports them when we’re made aware of it.”

At the time this story was published, the Azov movement’s main Facebook page, listed as Ukrainian Corps — a name that resembles that of the movement’s political arm, National Corps — was still active.

Facebook has come under heavy criticism for allowing US right-wing militant organizations to organize and run ads on the platform. Some of those groups have committed violence during Black Lives Matter protests, advocated for civil war, and allegedly conspired to kidnap and kill elected political officials. Facebook said last month that it had deleted thousands of pages and groups tied to “militarized social movements.” Many of those pages and groups were taken down after BuzzFeed News brought them to Facebook’s attention.

But driving right-wing extremists from the social network has proven difficult, with many of them popping up again days or weeks after removal.

Facebook banned the Azov movement, which has many members who espouse neo-Nazi beliefs, in April 2019. The company removed several pages associated with the group, including those operated by its senior members and the various branches they lead.

But since July 16, the group has been operating the new Ukrainian Corps page. The page does not try to hide that it belongs to the Azov National Corps — it openly discusses National Corps activities and leaders, links to Azov’s websites and email, and posts photos of members in uniforms at rallies and torchlight marches.

Facebook has no reason not to know that the Azov movement is dangerous. In the wake of a series of violent attacks on Roma and LGBTQ people across Ukraine by members of the National Corps and its paramilitary street wing, the National Militia, the US State Department named Azov’s National Corps a “nationalist hate group.”

Matthew Schaaf, who leads the Ukraine office of the human rights group Freedom House and has closely observed the group, said the Azov movement’s ability to mobilize people through social media poses a threat to society.

“In the last couple of years, participants of Azov-affiliated groups have used violence against vulnerable groups in Ukrainian society and threatened public officials, with social media serving as an important tool to organize these actions and share their results,” Schaaf told BuzzFeed News. “Many of these assaults are accompanied by before-and-after propagandistic posts on social media.”

Azov began in 2014 as a volunteer military battalion that helped Ukraine defend itself against an invasion by Russia and its separatist proxy forces. The battalion’s symbol is similar to that of the Wolfsangel, the insignia widely used by the German military during World War II. Although human rights groups accused the battalion of torture and war crimes during the early months of the Ukrainian-Russian conflict, in late 2014, Ukraine’s National Guard incorporated the Azov battalion into its official fold, where it was renamed the Azov regiment.

The military unit has been a favorite bogeyman of the Kremlin, with Russian President Vladimir Putin using the group to justify his attacks against Ukraine as fighting against fascism. Although the group is not broadly popular in Ukraine, its neo-Nazi links are clear. In 2010, the battalion’s founder, Andriy Biletsky, said that Ukraine ought to “lead the white races of the world in a final crusade … against Semite-led Untermenschen [subhumans].”

While the regiment still looks to Biletsky for inspiration, he has moved into politics; he served as a member of the Ukrainian parliament from 2014 to 2019 but lost reelection. He now heads the National Corps political party, which has been largely unsuccessful at getting members into elected positions but is using social media to try to grow support. He is also one of the founders of the movement’s Intermarium project, which builds bridges to white nationalists and neo-Nazis in Western Europe and the US.

Although Facebook previously took down Intermarium pages, a new Intermarium page was created on Sept. 9. Run by the National Corps’ international secretary, Olena Semenyaka, it has been sharing news and information about far-right and neo-Nazi figures in Europe and promoting “cultural” events at its Kyiv office.

Semenyaka did not respond to a request for comment.

Thanks in part to social media, the National Corps has made inroads with white nationalist groups in the US, including the California-based Rise Above Movement, whose members participated in 2017’s Unite the Right rally in Charlottesville, Virginia, but saw charges over their actions later dropped. In April 2018, RAM founder Robert Rundo visited Kyiv and took part in an Azov-organized fight club. That October, the FBI wrote that it believed Azov was involved in “training and radicalizing United States-based white supremacy organizations.”

Last month, Ukraine deported two American neo-Nazis associated with the US-based Atomwaffen Division who had attempted to set up a local branch of the group with Azov fighters to gain “combat experience.”

As Azov uses Facebook to expand beyond Ukraine’s borders, experts are growing concerned. “The use of violence and the possibility that they could muster large crowds of mostly young men ready to use violence, all of it facilitated by social media,” Schaaf said, “gives them power.”

Reversing the Rohingya Crisis: One Woman at a Time

AOC Mocked For Selling Expensive Merchandise With Leftist Slogans, Including “Tax The Rich”

My Voice, Our Equal Future! Joining the Chorus of Girls Who Are Speaking up for Change