Worried about your financial portfolio, your job, and your retirement, not to mention the future of the nation, if that idiot (fill-in-the-blanks) wins Tuesday?

Tip from a Washington D.C. insider: The next president’s last name has 5 letters. You take it from there!

Seriously. What if you really, for-dead-certain, knew right now whether President Donald J. Trump will be reelected or whether former Vice President Joseph Biden will replace him. Knew for sure. Would that knowledge change whether you decide to add more stocks — the C, S and I funds — to your portfolio? Or would you move more, perhaps everything, into the “safe” Treasury securities G fund? And if you had known last December what 2020 was going look like, would you have done any better? Would your investments — especially those based on political emotions — have been any better?

Arthur Stein, a Washington area financial planner, says politics should NOT be a part of your investment strategy. And he’s going to talk about it today at 10 a.m. EDT on Your Turn, you can stream it here or listen on the radio at 1500 AM in the Washington D.C. area.

To explain what he’s going to talk about, and why, he wrote this column:

Nine Months of Unexpected Events for the TSP Funds

The first three quarters of 2020 were some of the most unpredictable in US stock market history and for the TSP stock funds. No one expected the coronavirus pandemic to begin or for the subsequent Bear Market (20% or greater decline from a previous high) to become a new Bull Market in such a short time. Nor did anyone expect interest rates (and the G Fund monthly return) to decline 60% over the nine-month period, a period during which the U.S. budget deficit tripled to more than $3 trillion dollars.

What was most unexpected? All TSP funds – except I – are now positive for the year. 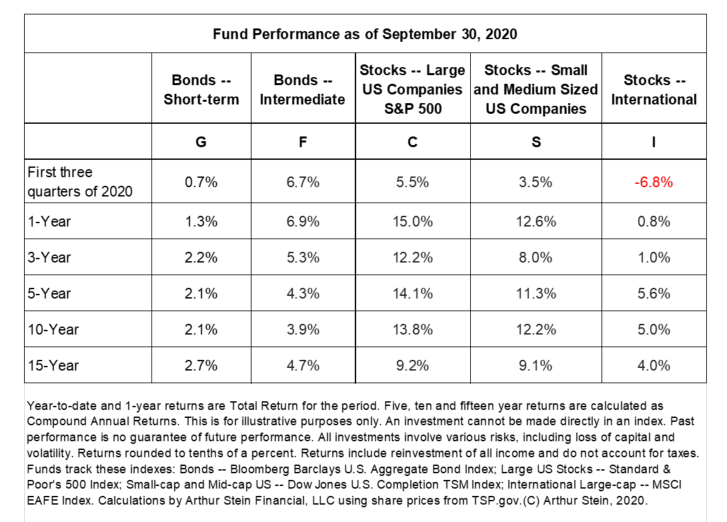 Volatility was high. After declining 20% during the first quarter, the C Fund increased 23% in the second quarter and 9% in third quarter. Total return for first three quarters was 5.5%. All returns include the reinvestment of dividends and capital gains. 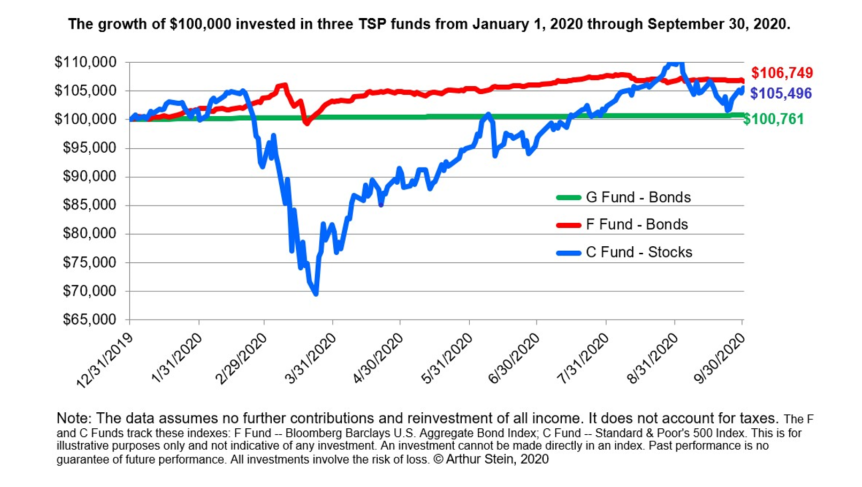 A common reaction is that it makes no sense for the stock market to be doing well when economic activity is still far below previous highs, fiscal stimulus programs have mostly expired, a vaccine is uncertain, political unrest is high and a return to full economic output seems far away.

Investors should not try to forecast future stock and bond market returns. No one knows what will happen in the future or how the markets will react.

That is why politics should not be part of investment strategies. I see many articles recommending financial and investment strategies to prepare for a Biden or Trump victory. These articles are based upon the assumption that the author can predict the winner of not only the Presidency but also the House and Senate, that elected officials will then do what they said they would do and that the reaction of the stock and bond markets to those events is predictable.

Neither the winners nor subsequent policy changes are predictable. As result (see my recent blog post), there is no strong correlation between Presidential elections and market returns.

Here are two recent examples of the impossibility of forecasting financial markets:

Past performance is not indicative of future performance but history has shown that a long-term approach to investing in stocks can overcome periods of heightened volatility, market corrections and even Bear Markets. Investors did not need to buy and sell at the right time; they needed to buy and hold for a sufficiently long period of time. They needed patience, not predictive power.

Of course, there have been long periods where stocks declined in value and past performance is no guarantee of future performance. But long-term stock investments produced a rate of return that was high enough to outperform bonds, increase purchasing power and justify the increased volatility.

Unlike the seven men who preceded him in the White House, Martin Van Buren (1782-1862) was the first president to be born a citizen of the United States and not a British subject. Van Buren won the White House in 1836 but was plagued by a financial panic that gripped the nation the following year. After losing his bid for reelection in 1840, Van Buren ran again unsuccessfully in 1844.

Cuomo: Drug Addicts In Rehab Will Be Given Vaccine Before The Elderly

Two Women Arrested On Terrorism Charges For Attack On Railroad