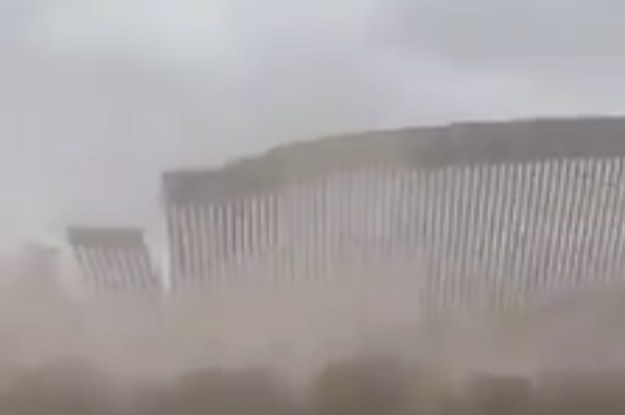 Over the weekend as Hurricane Hanna blasted through South Texas, video of border fence toppling over was widely shared and attributed to the storm’s winds, but US authorities said it wasn’t the case.

The US Army Corps of Engineers said the video was from June when high winds caused parts of the border wall to fall near Deming, New Mexico and not the result of the hurricane.

US Customs and Border Protection (CBP) said they weren’t aware of any border barriers falling over due to Hurricane Hanna hitting the Rio Grande Valley this weekend. The border enforcement agency suspected the video was from June in New Mexico, which was confirmed by the US Army.

“The video circulating on social media appears to be from June 2020 when high winds caused several border wall panels that were pending additional anchoring to fall over at a construction site near Deming, New Mexico,” CBP said in a statement.

The border fencing project was funded by the Department of Defense, CBP said.

The construction of a border wall was one of President Donald Trump’s main campaign promises. At his rallies, Trump said Mexico would pay for the wall, but that hasn’t been the case. Instead, the project is expected to cost US taxpayers billions of dollars.

In January, KYMA reported that several newly installed panels of the border wall fell over in high winds and landed on the Mexican side. CBP told the station that the sections that gave away had recently been set in new concrete foundation in Calexico, California and that it had not yet been cured resulting in the panels falling.

Despite the structure being described by Trump as “virtually impenetrable,” the Washington Post reported that smugglers had sawed through new sections of the border wall.

Another section of the border wall in South Texas that was built along the banks of the Rio Grande using private funding was at risk of falling down, ProPublica reported. The 3-mile section of border fence directly on the banks of the river that divides the US and Mexico was showing signs of runoff erosion, with engineers and hydrologists telling the news agency it should have never been built so close to the river.

HSBC’s Secret Files: The Inside Tale Of What Happened After It Apologized For Being Dirty