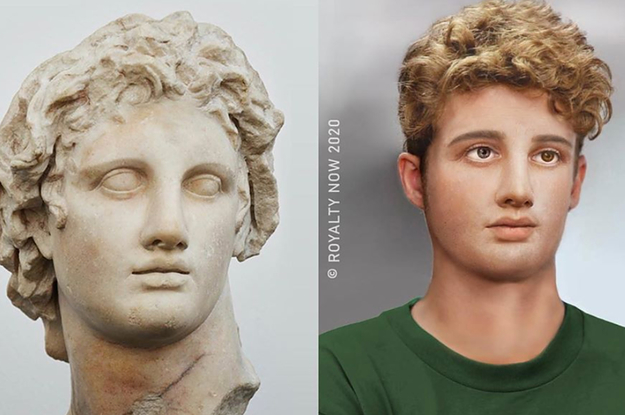 Earlier this year, we wrote about Royalty Now, an incredible project where graphic designer Becca Saladin photo manipulates historical figures into what they’d look like if they were alive today, and people couldn’t get enough.

You may remember how Saladin envisioned what Abraham Lincoln might look today:

She imagined what Mona Lisa — the subject of Leonardo da Vinci’s famous portrait — could look like in 2020:

And she created this image of what Julius Caesar might look like as an iPhone-carrying, modern-day man:

One of the coolest things about this project is how far Saladin goes to ensure her images are as historically accurate as possible. She tries to only use contemporary portraits of the figures (that is, portraits made while they were alive), and does meticulous research to find historical records of their physical appearance.

Saladin tells BuzzFeed that since we last checked in with her, she has set out on a “world tour” to shine a light on what a new group of historical figures from all over the globe might look like today.

She modernized Egyptian queen Hatshepsut, who ascended to the throne in 1478 BC and is regarded as one of the most successful pharaohs in Egyptian history.

She brought to the year 2020 legendary Venezuelan leader Simón Bolívar, who liberated much of modern-day South America from the Spanish Empire in the early 1800s.

And she envisioned Pocahontas as a 21st century woman.

Saladin — who has almost a quarter of a million followers on Instagram — says that one of the ways she chooses her subjects is by asking her followers who she should do next. A popular request was for the powerful 19th century South African king Shaka Zulu.

Saladin tells BuzzFeed, “I did a lot of European figures at the beginning, because those were the figures I knew best and learned about growing up. The best thing about gaining new followers has been learning about new figures in history from so many cultures and being able to bring them to life.”

Some of these portraits were harder to realize than others. Saladin says, “The challenge with creating certain figures came from the portraits themselves. For instance, my portrait of Queen Mother Idia was challenging because it was created from a mask. When I first started creating this art, I didn’t think I’d ever get good enough to create something from a mask, but I attempted it and I’m really happy with how it turned out.”

Her modernization of Mumtaz Mahal — the woman for whom the Taj Mahal was built — was also challenging because it was based on a very stylized portrait. Saladin says, “I’ve finally figured out how to translate stylization into more of a realistic portrait, which opens up a lot of doors. Many cultures portray their leaders as more of a stylized ‘essence’ rather than a photorealistic image, which has presented a huge challenge for me. Now that I’ve improved my skills, I’m getting better at navigating those.”

Saladin is proud of her new work and believes it to be of a higher quality than her earlier work. Below she brings Akhenaten — the ancient Egyptian pharaoh who reigned circa 1353–1336 BCE — into the modern day.

As for the future, Saladin is excited to expand what she’s doing and has been working on new offerings like bookmark designs, prints, and digital downloads. She’s even on TikTok, where she makes videos showing the transformation process.

Could the ‘Squad’ Replace Nancy Pelosi As Speaker After The GOP Flips Several House Seats?

International Students Are Trying To Cope With Trump’s Online Class Rule: “America Is Ready To Kick Me Out”